Crisp air, the changing colors of leaves and a renewed excitement on Saturdays… it must be college football season. And this year, Timex is proud to provide dedicated fans of NCAA football teams with our Collegiate Tribute® collection. Perfect for game day, or every day, the collegiate Tribute watches come in dress, casual and sport styles to match your outfit and show your team allegiance at the game, at work or a night on the town.

Many pre-season publications are picking the usual suspects for the top spots. We complete the predictions with our pick for the right watch to match the program. 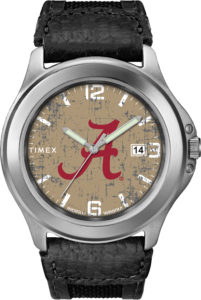 1) Alabama: It’s been said few things are certain in life, but Alabama being in the National title game is one of them.  Alabama has won five national titles and almost won a sixth if it weren’t for late-game heroics by Clemson. The Crimson Tide win games the “old school way” with a punishing ground game, conservative air show and a concrete wall of a defense. We recommend the Timex Tribute Old School watch for raving Crimson Tide fans! 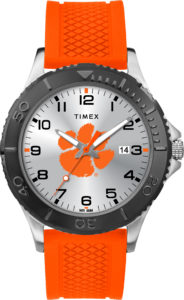 2) Clemson: Another familiar face when it comes to the College Football Playoffs are the Tigers of Clemson. A storied program that only had one national title on its resume, Clemson broke through in 2016 and upended Alabama to take home first place. With a defense that consistently turns out 1st round NFL draft picks, particularly on the defensive line, and a mix of capable athletes, Clemson will have no shortage of offensive and defensive firepower. Tiger teams come to play, so for Clemson fans, we recommend the Timex Tribute GAMER! 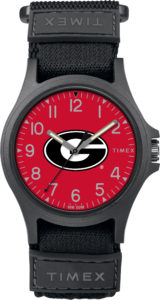 3) Georgia: The pride of the south is college football. Since 2006, 11 of the 12 national champions have come from southern schools with Ohio State being the lone exception. After a heart-breaking loss to Alabama in last year’s title game, the Bulldogs will be looking to prove their run was no fluke. This team has plenty of talent waiting for their shot. Consider the Timex Tribute Pride to show off your Bulldog colors! 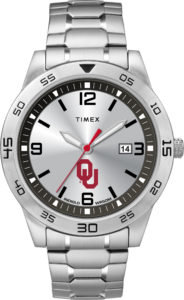 4) Oklahoma: Back in the 1980’s Oklahoma used the traditional wishbone running game to roll over the competition. Now the Sooners take to the air to pile on points and remain a perennial playoff threat. The Sooners have won 11 of the last 18 Big 12 Titles so expect eager underclassmen to join top returners in keeping the Sooner Schooner rolling. Take a look at the Timex Tribute Citation for a more traditional look that stills shows your Sooner allegiance.

There are a host of teams going into the season that have legitimate shots to upend Alabama. And Timex has a watch to show off who you think will be this year’s national champion. Enjoy the 2018 Season!